Food plays a huge part in my life. the most important part in actual fact. I’m sure it must be more important to me than it is to other people, which is why I’mm so fat.

My step sisters (Who I haven’t seen for almost 30 years) used to have to be reminded to eat. They never got hungry and would complain if asked to interrupt what they were doing to make themselves eat something. Of course, they had perfect figures.  I am always hungry. Probably not really, but psychologically hungry. The thing is, I love food, I enjoy the tastes, the textures, the sensations of eating and dining. Would that I could just stop eating and become as sylph-like as my step sisters of old. I use to smoke cigarettes many, many years ago and stopping smoking was easier than reducing my food intake. My view is that I could cast  aside cigarettes completely, never having to look at one again. But with food, I still have to come into contact with it to survive.

So until I have something more interesting to do I continue to enjoy food and eating.  There were some fabulous eating experiences to be had in New York. We visited a traditional Jewish Deli, called Katz’s Deli, which is famous for THAT scene in the film When Harry Met Sally. The Deli was a fantastic place, bustling and loud, with pictures lining the walls of famous diners past and present, signs from all eras, including one that read “Send a salami to our boys in the army”. The beef sandwich that arrived  for just me was enough to feed a family of 6,  accompanied by a huge plate of fries and a pile of ‘slaw’. We’d already had pickles of various kinds to start (gherkins etc).  Wonderful place.

Another fabulous experience in New York was the Stardust Diner, where we had breakfast and were entertained at the same time by the waiting staff, sho took turns to jump up and sing. And very good they were too. Apparently, many of the waiters have gone on to appear in Broadway shows. The diner itself was of course on Broadway and as well as some bloody good entertainment, the breakfast of pancakes, bacon and maple syrup was fab.

Sardie’s restaurant was also great. A traditional and old restaurant, very classy, on Broadway, served us a beautiful 3 course dinner in quick time so we could catch the Broadway show.  Had lots of other great food too – a lovely cream cheese NEw York Bagel outside the world trade centre; a massive burger at the NY Hard Rock Cafe; and not forgetting the room service breakfast at the Waldorf Astoria, where we stayed. Had to have one breakfast on the last morning (at a cost of £40 each) but it was superb and wonderfully presented.

Here are some photos of the aforementioned places…. 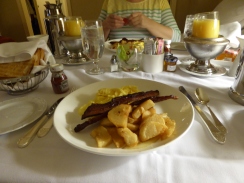 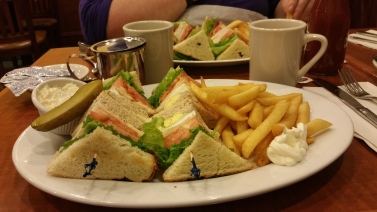 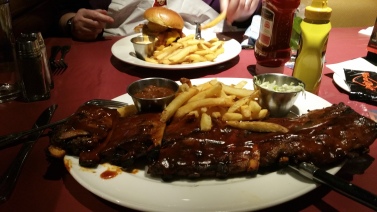 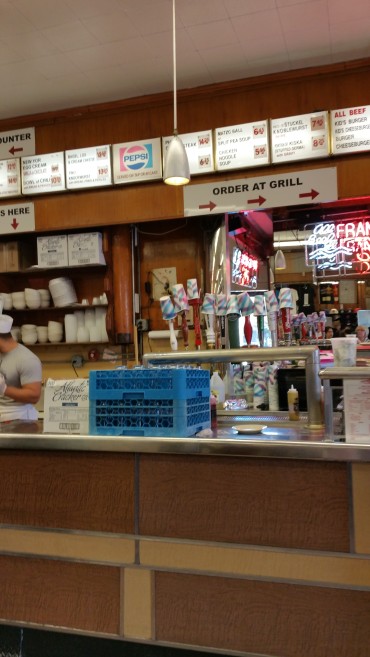