I was pondering on a good subject for my blog this week, when I realised that I shouldn’t be thinking too hard and just get on and write something!
The idea of a daily diary blog isn’t new – my friend Bill has been doing this for years. So thanks Bill for the idea and I hope you don’t mind me nicking it..

Despite the clocks going back at the weekend, it is still dark when I get up for work. This morning was even darker as it was tossing it down with rain when I left the house. The drive to work was dark, wet and unpleasant. I’m not good with constant darkness!
The clock in the car is still an hour ahead as I haven’t worked out how to change it yet, but the darkness tells the truth of the time, so I play cheery music on the iPod to lift my mood.

Work was uneventful, slogging away with ISO system integration most of the day, except for popping up and down to see how the engineer was doing. I called him out to look at the machine I was fighting on with last week. I’d got it working to an extent, but it just wasn’t right, so I figured the experts could put it right. He has been here for three days and has only just got it to the stage it was at before I called him out! He now reckons we need a new console and program.

I can’t seem to stop eating at the moment. Don’t know if its the dark or what, but I am going to explode if I don’t stop eating soon…
I start off every morning with good intents, but my resolve weakens as each hour passes. Breakfast was healthy, but then I had a banana at 10am, which should have been ok till lunch, but I had to go and buy a pack of the charity sweets that are in the canteen. Then rather than just go out for a nice healthy salad, I bought a blt sarnie, plus crisps and a chocolate bar! Good grief…
STOP EATING BARB!!

Going to the food shop at lunchtime did serve one purpose though. I finally read the car manual and changed the time on the car clock.

I drove home in the dark too, which I really don’t like. The only daylight I see from now till march will be at lunchtime and today was grey and wet.
However, Marion had made a nice chicken casserole when I got in, so that was ok.
I didn’t have to eat 2 pieces of toast after dinner though….

Tonight was supposed to be the WOW writing group in Cockermouth, but it was so cold and wet, I just didn’t feel like going. Plus I hadn’t written anything and we all read out what we’ve done, so it was a bit pointless me turning up. Not done much writing at all lately, been much too busy.

So instead I did a little bit of drawing – I’m working on a dog portrait for a friend,who put me up during the Olympics, so I thought it would be a nice Thankyou gift. She adores her dog, so hopefully will like the portrait.

That’s my day. Exciting isn’t it? Oh, forgot to mention that I had washing up to do. The dishwasher broke down the other day and the repair man has had to send for a new element. So manual washing up till it arrives. Purgatory!
Now that I’ve written my first diary blog, I’ll retire early to bed to read my book, which I’m quite enjoying. It’s easy reading, but that’s what I need after a day of ISO!
It’s called Stolen by Susan Lewis.

Oh, and sky have sent a letter – we have finally got high speed broadband in Keswick, so I can go onto their cheaper package!

My black nail is great now, I love how the human body does things like this!
Here it is, and with that last bit of excitement I bid you goodnight x 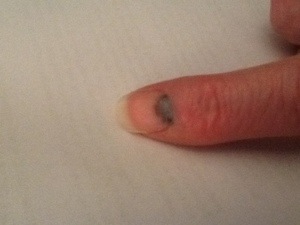